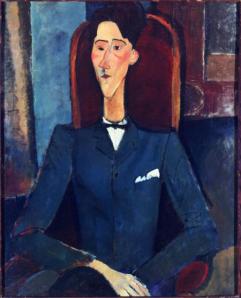 And that was just the first two months of 1913!

Meanwhile, across the pond, Modern art and literature were getting underway in Paris. Guillaume Apollinaire established his reputation as a poet with the publication of “Alcohols” and crystallized the Cubist movement with his essay “The Cubist Painters.” Marcel Duchamp created his first readymade, Diaghilev’s Les Ballets Russes performed Igor Stravinsky’s The Rite of Spring, and Eugène Atget assembled his photographic album “The Zones.”

The exhibition 1913: The Year of Modernism at the Princeton University Art Museum March 23 through June 23 explores the Modernist moment in Europe through 50 prints, drawings, and photographs drawn primarily from its collections, as well as rare books and periodicals from the special collections of the Princeton University Library. Although a small show, it includes work by the heavy hitters of the era.

A few weeks before the installation, curators Efthymia “Effie” Rentzou, assistant professor in the Princeton University department of French and Italian, and Calvin Brown, associate curator of prints and drawings, gathered around a table in the prints and drawings study room, inches from works on paper by the likes of Picasso, Chagall, and Klee.

There are woodcuts on Japanese paper by Raoul Dufy that were done as illustrations for Appollinaire’s “Bestiary”   and part of a portfolio by Otto Dix. Seeing them so close, and not behind glass, is an experience Princeton University students are encouraged to have.

Rentzou teaches a graduate seminar in French Modernist Poetry in this room, where students can discuss original works of art. Last year she taught the Avant-Garde Century to undergraduates. “The collection is here for teaching, and we put together seminars and exhibitions around the collection,” says Brown.

The spirit of 1913 was one of experimentation, opening new directions in art and literature and collaborating between the two, says Rentzou. The Modernist aesthetic sparked movements in Italy, Germany, Russia, Great Britain and America. Then, a year later, World War I erupted; the spirit of exhilaration turned to an aesthetic of brutality.

The Dadaists formed in 1916 as a reaction to the horrors of war. Dadaists rejected reason and logic, prizing nonsense, irrationality and intuition.

“Many of these movements favored pamphlets and publications to reach out to a broad public and experiment with different media to get the word out,” says Brown,  carefully thumbing through a manifesto on Futurism by F. T. Marinetti. Rejecting art and culture of the past, in favor of modern life, Marinetti experimented with different typefaces in various sizes, colors and layouts. “Zang tumb tuuum” is a sound poem; when performed it re-creates the sounds of gunfire and grenades.

One wall is devoted to poetry, with a portrait of poet, playwright and filmmaker Jean Cocteau by Modigliani – he often painted friends from the Bohemian World — and two Raoul Duffy woodcuts, to illustrate the cross-pollination between painting and poetry. Apollinaire’s “Calligrammes” is a kind of visual poetry – the poem itself becomes the image and blooms like a flower.

Considered a milestone in the development of artists books and Modernist poetry, the poem “Prose of the Trans-Siberian and of Little Jehanne of France” by Blaise Cendrars, illustrated by Sonia Delaunay, is about a journey through Russia on the Trans Siberian Express during the first Russian Revolution. With its abstract colorful brush strokes, Cendrars himself referred to the work as “a sad poem printed on sunlight.”

Twelve fonts in differing sizes and colors and images that complement, rather than illustrate, tell the story of a 16-year-old’s journey from Moscow to Siberia in the company of a young Parisian prostitute, viewing apocalyptic scenes of hunger, death and the devastation of war.

At 80 inches tall by 14 inches wide, it was originally intended as an edition of 150, and if all were stacked end to end, it would have reached the height of the Eiffel Tower, a symbol of modernity.

The Futurists, prior to the start of the war, admired power, force, movement and technology, and glorified war, while the Dadaists focused on the absurdity of war. “No war had been as deadly, nor had technology been used as much.”

The British responded to Italian Futurism with Vorticism, a term coined by Ezra Pound to describe a group envisioning themselves an alternative to Cubism, Futurism and Expressionism. A magazine with a bright pink cover titled “Blast” contained paintings, poems, and the Vorticist Manifesto. The Vorticist movement ended with the second issue of “Blast.”

There is a wall of Atget’s photographs documenting vanishing Paris. In just over three decades, Atget made 10,000 negatives of images of shop windows, parks, street scenes, and a rag picker’s shack. He only achieved widespread recognition when American photographer Berenice Abbott published many of his images and championed his work in the 1920s.

“These were made long before 1913 but were influential to the Avant-Garde after the war,” says Rentzou. “The vanishing 19th century and the beginning of the 20th century was a moment of change and Atget captured it.”

The exhibit ends with works by Klee, Soutine and Picasso “to show where the spirit of 1913 goes,” says Rentzou.

1913: The Year of Modernism is on view March 23 through June 23 at the Princeton University Art Museum. http://www.princetonartmuseum.org/