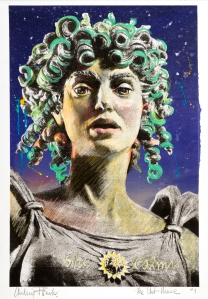 She looks like a rock star, with tight jeans, spiky blond hair, gold sneakers and chains around her neck. From these  hang a medal she won for “best artist” at Music and Arts High School, New York, 1948, and a tiny coin with a female head. “It’s Faustina,” says Audrey Flack, 81. “The only woman on a Roman coin.”

The renowned artist and art history professor was the star of the June 3 Feminist Fete at Rutgers University Mason Gross Galleries, where Audrey Flack: Recent Pages from an Ancient Past is on view through June 30. And she is in a band – as lyricist, lead singer and banjo player in Audrey Flack and the History of Art, accompanied by an upright bass, two guitars and another banjo.

This isn’t her first bluegrass band — Audrey Flack and the Art Officials, and the Flacktones came before. Flack took up banjo at Yale where, as a student, she had a crush on a banjo player. “I didn’t start out writing feminist songs,” she says.

The History of Art sings about Jackson Pollock – Flack knew him as a young Abstract Expressionist, but was disappointed when, in a bar, drunk and with a stubbly beard, he crudely attempted to pick her up rather than discuss art. They sing about Cooper Union, where Flack studied 1948-1951 (she earned her BFA at Yale in 1952). There are songs about Picasso, another womanizer (“he said women were either goddesses or doormats and treated most of them as doormats”), and Camille Claudel, the sculptor who was model, lover and assistant to Rodin, and institutionalized by her family for what may or may not have been schizophrenia.

Perhaps the band best earns its name with “The ism Blues”: Modernism, Impressionism,

Surrealism, Photorealism. Flack never fit the isms. She wanted to draw and paint realistically. “In high school, I was told Rembrandt was old-fashioned,” she says. While at Yale, she didn’t fit in with the Abstract Expressionists — Josef Albers, Franz Kline, Willem deKooning.

Although Flack is credited with having made the first true Photorealist painting in 1964, she was surrounded by Minimalism, Conceptualism and Post-minimalism. And even within Photorealism, her subject matter was under scrutiny: she chose everyday objects and presented them with kitsch: saccharin sweets, makeup pots and jewelry, cigars, beer cans, Jack Daniels, money, playing cards, skulls.

“Dizzying to look at, her paintings… simultaneously repel and attract the viewer,” writes Helen Molesworth in the exhibition catalogue. “The protean ooze of the textures, many of which are doubled by their reflection, speaks to a kind of specifically American excess…” 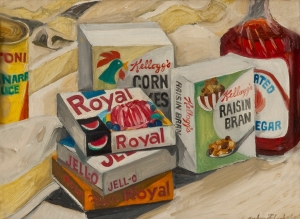 Flack recounts how some of her still lifes were called the ugliest painting of the decade – and ten years later acknowledged as masterpieces. Her work is in the permanent collection of the Museum of Modern Art, the Guggenheim, the Whitney, and the Metropolitan museums of art, as well as many others throughout the U.S.

By the 1980s, Flack gave up painting altogether for  sculpture. She made heroic, goddess-like figures, based on Classical Greek and Roman sculpture but with contemporary themes. Molesworth describes the bodies as belonging to a post Title IX-era, where women are fit and athletic.

For the Feminist Fete, 40 resin editions of an original Flack sculpture, “Head of an

Angel,” were being sold to raise money for the Rutgers Douglass Developmental Disabilities Center and the Institute for Women and Art.

Coming of age in a pre-feminist era, Flack not only juggled the usual demands of career and family, but struggled to meet the special needs of a daughter with autism. “You didn’t talk about being a woman or having children – you didn’t have children,” she says in a video accompanying the exhibition. “You couldn’t be serious if you were a woman with children, and particularly a woman with a child with a problem.”

“I kept telling the doctors there was something wrong,” she continues. “They said I was nervous. It was the dark ages – no one heard of autism.”

“Some children and adults with autism will avoid gazing at you because they don’t understand the eyes are a modality of communication,” says Sandra Harris, executive director, Douglass Developmental Disabilities Center.

The DDDC has an early intervention program to diagnose those on the autism spectrum or at risk.

Flack selected DDDC as the beneficiary because she knows how important it is for a family to get help as early as possible. DDDC works with pediatricians to help them recognize early warning signs during well visits, says Jacqueline Dobres, a behavior analyst and early intervention coordinator. “Once they realize the diagnosis parents come to us. We can help with the transition from preschool to a school district and let them know what is available in their community.”

“This is our third Feminist Fete,” notes Ferris Olin, founding director and curator, along with Judith K. Brodsky, of the Institute for Women and Art and the Mary H. Dana Women Artist Series, which is presenting Metamorphoses: Pictures by Audrey Flack through June 30 at Douglass Library. Last year’s Fete honored the Guerrilla Girls, and the previous Fete honored Faith Ringgold.

“There are many distinguished artists who deserve to be recognized,” Olin says, citing a recent article in The Economist that discusses the gender disparity in artwork sales.

“Audrey is an appropriate honoree because of her stylistic impact, and the feminist content of her still lifes and domestic scenes,” says Brodsky. “For a well-known artist to paint her family was unheard of.” Brodsky reminds us that women invented still lifes, domestic scenes and vanitas during the Renaissance, though were never credited.

There are still a limited number of editions of Flack’s “Head of an Angel” for sale at $250. Each resin cast is hand finished and colored by Flack. To purchase, contact womenart@rci.rutgers.edu.

This entry was posted in Uncategorized. Bookmark the permalink.