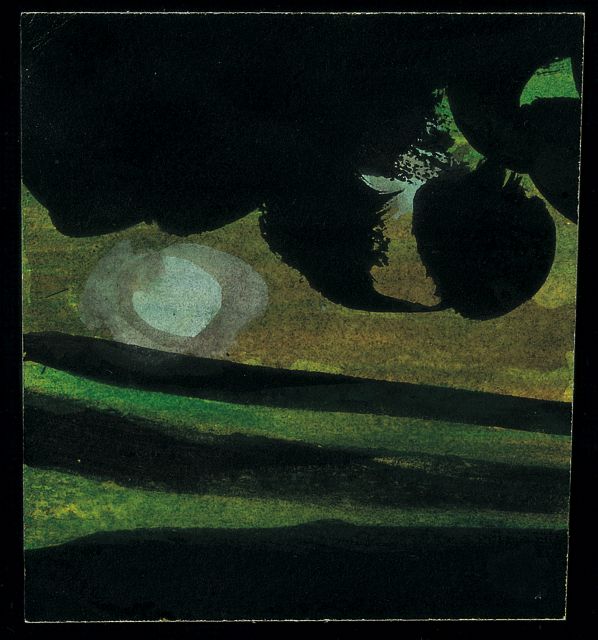 From the mountains of China to Norway’s Lofoten Islands, from the sunsets of the American Southwest to gardens in France, England and Japan, Princeton artist Thomas George has immersed himself in the beauty and mystery of nature for more than six decades.

In recent years, Mr. George, 93, has come inside. No longer filling large canvases, he is working smaller, but the theme remains as large as the galaxies he paints.

He calls these newer works interior landscapes, or inscapes. “I have found that moving into a restricted workspace … has conferred real benefits,” he writes in an artist statement. “I have realized that my subconscious and my imagination have, paradoxically, more space in which to work and speak. As I have made the gouaches, I have been recalling such natural phenomena from where they are stored in my subconscious.”

Proceeds from the show will benefit the Thomas George Fund at the Princeton Area Community Foundation, which provides grants each year to support emerging artists in central New Jersey.

”It is a remarkable legacy,” says Community Foundation President Nancy Kieling, “that Thomas George is nurturing young artists with the gift of his own artwork.””When I was young, I was helped by others, including my parents,” says Mr. George. “The G.I. Bill enabled me to study in Italy and France, and my parents were sympathetic to my studying art. I had my career, so I want to help young people.”

He has helped several students thus far, and as of the opening, he’ll continue to help more: Ten of the paintings, priced at $1,200, have already sold.

”I have followed Tom’s work with great admiration over the years, from his monumental alpine landscapes, to his pen and brush, and watercolor works on paper,” says curator Kate Somers. “When Tom invited me over to his studio a couple of years ago to see this new series, I found them to be among the strongest of his entire career. Small in size but possessing an enormous quiet power, I immediately thought that the scale of the Arts Council’s gallery would make a perfect venue for them.”

A Princeton resident since 1969, Mr. George has been generous with his expansive oeuvre, giving to the Princeton University Art Museum, the Hood Art Museum at Dartmouth College, the Arts Council of Princeton, and the Princeton Area Community Foundation. His own success as an artist came from hard work, he says. Mr. George estimates he’s made more than 5,000 paintings in his lifetime, and filled more than 100 sketchbooks.

Born in New York in 1918, Mr. George attended Dartmouth College, and served in the Navy during World War II. He studied art in Paris and Florence, Italy, and has lived and worked abroad for a good part of his life. “Intense visual curiosity” was his impetus. Closer to home, he has spent years making pastel sketches in the Institute for Advanced Study Woods and Marquand Park.

The artist has had four retrospective exhibitions, including one at the Princeton University Art Museum in 2005. His work is in the permanent collections of the Museum of Modern Art, Whitney Museum, Guggenheim Museum, Tate Gallery, National Museum of American Art, the Institute for Advanced Study, and many others.

Most of his work is abstract landscape. Whether oil, watercolor, pastel, or pen and ink, his choice of medium is based purely on his feeling for the subject matter. New York contemporary art dealer Betty Parsons taught him what he considers an invaluable lesson: “Don’t paint what you see, paint what you feel.”

Design and pattern in nature have captivated him. “The circle is a big item in my psyche,” he says. He repeats the lines, shapes and colors he loves “until I am wholly myself in my art.”

Mr. George describes his art as an obsession. “It’s a very powerful preoccupation, expressing what you want to say about the world.”

For many years, Mr. George lived in what had once been a barn of the Moses Taylor Pyne estate (Drumthwacket) in Princeton, with an expansive studio and exhibition and storage space.

After moving to smaller quarters, he has been sticking to smaller works on paper. “I have no way to ventilate the fumes of oil paint,” he says.

Having painted on location for so many years, it is no longer necessary for him to work outdoors. The vision is now in his head, and he can sit in the studio, letting the brush do its magic dance on paper.

”Mountains and sea and sky are my subject matter,” he says. “If you do enough of it, you don’t need to be out there looking at the scene, but inside seeing it … If I listen to my subject, it will tell me how to work.”

”When you get older, your ability to go to the ends of the earth for motifs are limited, so you narrow your vision,” says Mr. George. “Old age is teaching me how to let go and thus achieve a degree of serenity … I believe this movement toward personal peace quite often leaves its mark in an artist’s late work … an image can work itself up from the paper into sight and consciousness.”