There Are Places I Remember 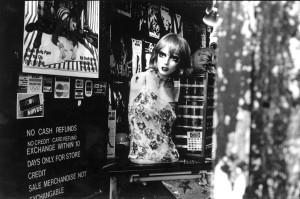 We are at a train station, looking at the back of a woman  sitting on her valise, waiting. Alongside her are newspaper drop boxes: the New York Post and the Trentonian calling out “Mother’s Day Blood Bath.”

In another photograph, a woman, also viewed from behind, is looking at the swirly artwork at a fun house ride. These are classic George Segal scenes.

Acclaimed as one of the major sculptors of the 20th century, Segal’s international reputation was built on the human figure cast in white plaster, along with furniture and artifacts, comprising groupings of brooding figures enduring harsh realities, ordinary people surrounded by the mundane details of everyday life.

Most of the world knows Segal (1924-2000) from such  sculpture as “Depression Bread Line,” depicting a series of down and out men. Most of central New Jersey knows George Segal as the down-to-earth artist who worked out of a chicken coop in South Brunswick. But very few know Segal for his photography. Princeton University’s Firestone Library is exhibiting a collection of 30 of his photographs, all part of a gift the library received from the George and Helen Segal Foundation in 2009, as well as Segal’s Leica camera.

Ketchup bottles, diners, solitary figures in large urban spaces – blurring the lines between commerce and humanity, the themes Segal focused on in his sculpture are  here in his photographs, too.

Segal was born in the Bronx in 1924. Both parents were Kosher butchers. When he was 15 the family bought a chicken farm in South Brunswick, and his father tried to persuade George to go into chicken farming, which he deemed more lucrative than art.

Working part time as a chicken farmer, George studied at Cooper Union, Rutgers, Pratt and NYU, and went on to earn a master’s of fine art at Rutgers in the 1950s.

As he was finding his voice as an artist, Segal worked in paint and pastel, inspired by Degas, Matisse, Picasso, Gaugin and Cezanne, and was surrounded by Abstract Expressionists as well as Pop, Op and Fluxus artists. But Segal was more interested in the poetry of everyday life. With Johnson & Johnson nearby, he discovered plaster bandages and soon developed his technique of wrapping figures and creating plaster casts.

Those chicken coops came in handy for Segal, who used his family members to wrap in plaster, often creating tableaus, or environments for the figures – a bus stop, for example, or a heating vent on a city street where a figure in a watch cap sits with folded arms. His daughter, Rena, and wife, Helen, were his most frequent models.

In the 80s, Segal returned to drawing, pastels and fine art photography. Interestingly, his later work in pastel and scratchboard is mostly black and white, much like the photographs.

No matter the medium, he remained interested in the desolate cityscape of New York and New Jersey, and the solitary figures who populated them. Like the American realist painter Edward Hopper, he was interested in the psychological isolation in the midst of the urban environment. He would make day trips to Coney Island, the Ironbound section of Newark, the Lower East Side and East Village, and such Jersey Shore towns as Asbury Park, Keansburg and Seaside Heights.

His photographs were put into a portfolio, Sequence: New York/New Jersey, 1990-1993 and exhibited in New York, California and France, but most of the 7,000 surviving photographs remain unknown. They are preserved as part of the George Segal Papers, comprising nearly 80 linear feet of correspondence, business files and original art within the Manuscripts Division of the Firestone Library’s Department of Rare Books and Special Collections.

“He was inspired by the immediate environment – highways, gas stations, bus stations, subway tunnels – and used his friends as models,” says Valerie Addonizio, who co-curated the exhibit with Don Skemer. He lived his entire life here, and walked to Coney Island and Asbury Park boardwalks as a child.”

“It’s what everyone who has commuted on the New Jersey corridor has experienced,” says Addonizio. “The feeling of waiting in line to get back on the bus.”

“He was finding art in everyday life, in the mundane,” says Skemer, curator of manuscripts in the library’s Department of Rare Books and Special Collections. “He photographs people who seem isolated and alone in their thoughts.”

“He was interested in simple moments,” says Addonizio. “He found a style and stuck to it. For 74 years he was George Segal.”

When the Segal Foundation contacted Firestone Library about donating the papers, Segal’s daughter, Rena, told Skemer her father used to take a lot of photographs.

“Do you want them?” Skemer recounts Rena asking. “They’re every place.”

Those that had been in Sequence were printed for exhibition, but most others were in the form of small prints, negatives and contact sheets.

Some of the photographs were used for works in other media. “Jonas Mekas,” 1998, was used for “Man Wearing a Hat,” a charcoal sketch.

In some cases, Segal would make extreme enlargements of the photos to create a photomural to set the scene for his sculpture. For example, a photo of a liquor store would become the backdrop to life-size figures.

In 1983, after traveling to Israel and Egypt, Segal was unhappy with his photographs and contacted his friend Donald Lokuta, who taught photography at Kean University. The two would accompany each other on photographic explorations and frequently appear in each other’s images. Lokuta is one of the figures in “Depression Bread Line,” as is Segal himself. Lokuta printed many of Segal’s photographs for this exhibit; Taylor Photo in West Windsor printed those that were not printed by either Segal or Lokuta. Lokuta prints were used as a guide by Taylor. Segal especially liked high contrast, dark prints.

Lokuta went on to document Segal, his studio, his casting sessions and his family. There are photographs of each of them photographing each other in diners and other places.

The original prints from Sequence were boxed and well preserved. Others, that were merely tools for another purpose, were not so well cared for.

“They were left on the table where he worked,” says Skemer. “His chair is still there. He knew the 5-by-8’s were working copies, and if he felt they were more important he would print them larger.

Addonizio, who was born in Freehold and grew up in Marlboro, says Segal was quintessentially New Jerseyan and viewers will feel right at home with his images. Her father was a truck driver and longshoreman and her mother worked as a secretary. (Her great uncle was Hugh Joseph Addonizio, mayor of Newark from 1962 to 1970.) Addonizio earned a bachelor’s degree in history  from Rutgers in 2006, and earned a master’s in Library Science at Rutgers three years later.

Asbury Park, once a bustling shore town, has “grand attractions gone sour” in these images of dilapidated and abandoned buildings. “I spent my childhood with my father, going to boardwalks, so when I saw the photo ‘Boardwalk’ 1991, I knew immediately what it was,” says Addonizio. “For me as curator, it’s the way I remember it, dilapidated, but for him, he was seeing it as a boy when it was vibrant. As an adult he’s capturing the isolation. And now, Asbury Park is on the way up, and this building has been renovated.”

“I remember getting barbecued ribs and French fires at a stand in ‘Woman at Seaside Heights,’ 1998,” Addonizio recounts. “And the cigarette ad over a children’s ride in ‘Marlboro Man,’ 1991, is something you’d never see now.”Skemer, too, is reminded of familiar places in these images. “I went to Coney Island as a kid,” he says. “It was run down, but I loved it. What is more isolating than someone alone at an amusement park? We would go in winter, when there wasn’t a soul there. I still like going to the shore in winter, when there are no crowds. It’s still shuttered like that.”

Skemer was born in the Bronx, like Segal, and grew up in Riverdale and Bayside, Queens. His father worked with large motors and generators as a mechanic, and his mother was a homemaker. With a bachelor’s degree from City University of New York (1968) he went on to earn a doctorate in medieval history from Brown (1972). A year later he earned a Master’s of Library Science from Columbia.

“I’ve lived in New Jersey since 1974, and I love photography and New York,” says Skemer. “This is the third photography show we’ve done here.”

“Segal loved mannequins,” Skemer continues, looking at the photograph “Mannequin Torso.” “They were another kind of plaster people.”

Winnowing out the Segal photographs to exhibit from the 7,000 was no easy feat. Addonizio and Skemer worked together, using Segal’s sculpture as a theme.

“Rembrandt was one of his favorite artists,” says Skemer. “You can tell by the characters lost in thought, contemplative.”

1 Response to There Are Places I Remember