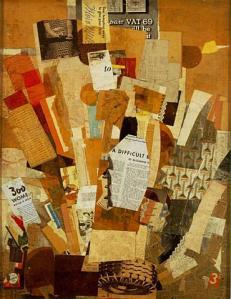 Try this at home: Go out for a walk, gather up a few objects of detritus – say, a discarded key, unidentifiable metal disks, feathers, a paint can lid – and bring them home to combine with scraps of old paper, bits of lace and other material from the patch drawer. Add some corrugated cardboard and arrange into a magnificent design. Don’t forget color.

Collage is not easy! Creating something out of scrap that becomes an object of beauty takes an artist’s eye, and Kurt Schwitters (1887-1948) was a master at putting disparate objects together, with brilliant design and color, to create a meaningful image.

Georges Braque and Pablo Picasso are credited with establishing collage as a modern art form, but Schwitters took it in his own direction. Robert Rauschenberg, Jasper Johns and Ellsworth Kelly were all influenced by him.

Kurt Schwitters: Color and Collage, on view at the Princeton University Art Museum through June 26, is the first major Schwitters retrospective in the U.S. since the Museum of Modern Art held one 26 years ago. This will be the only east coast stop for the exhibition that originated in Houston, Texas, curated by Isabel Schultz.

Born in Hanover, Germany, Schwitters was affiliated with the Dadaists and Constructivists. In their determination to be oppositional, the Dadaists rejected all that art and traditional aesthetics had stood for. It was a criticism of the times. Otto Dix, Jean Arp, Max Ernst and George Grosz were among those who practiced at the edges of Germany’s revolutionary art and intellectual movements in the wake of the First World War.

Hitler viewed the Dadaists as “Degenerate Artists” and persecuted them. They were dismissed from teaching positions, forbidden to exhibit or sell their work and, in some cases, forbidden to produce. It is paradoxical that Hitler, himself a frustrated artist, dictated his own personal taste in aesthetics.

Schwitters coined the term “Merz” to describe his art, which included collage and painting, sculpture, typography, poems and performance pieces. The syllable Merz, from the German Kommerz (commerce), represented Schwitters’ total vision of the world, applied to his entire oeuvre.

With 78 works of art, this retrospective concentrates on Schwitters’ painting and collage, says Kelly Baum, PUAM Haskell Curator of Modern and Contemporary Art. “He was a pioneering original artist and very sensitive to the creative ferment around him in his world. His collage and assemblages synthesized different strands of influence – Cubism, Expressionism, Futurism and Dada – and were altered through the use of found objects. He was at the center of this brew, registering the shifting winds of the art world.”

The son of owners of a prosperous clothing store in Hanover, Schwitters was trained as a painter at the Dresden Academy, 1909-1914. He never stopped painting, and supported himself painting traditional landscapes and portraits. “Painting informs almost all of his work, as witnessed by the passages of gouache, chalk, oils, paste, and watercolor in his collages and assemblages, additions that transform the materials they cover,” read the exhibition materials.

Schwitters suffered from epilepsy, and was declared unfit for service by the German army. While studying art, he was also writing poetry. Ironically, the Berlin Dadaists rejected his application because they felt he was too conservative. “They thought he was too middle class and bourgeois, even though he presented himself as a Dadaist,” says Baum.

A month later, Schwitters (the “w” is pronounced like a “v”) published an essay explaining the concept of Merz and a Dadaist love poem, “An Anna Blume.” The poem was translated into several languages and brought him international notoriety. In 1920, the International Dada Fair burned Anna Blume in effigy because they scoffed at Schwitters.

In true Dada spirit, Schwitters responded to his critics in often hilarious texts.

Whereas the Cubist collagists worked monochromatically, by the 1920s, Schwitters’ three-dimensional assemblages, influenced by Russian relief sculptures, became brighter in more primary colors. “It’s hard to find an artist who wasn’t influenced by Schwitters,” says Baum. “Even when his collage didn’t contain paint, he still works as a painter, composing and arranging with paper.”

Using the paper as his paint, he went from torn edges to neatly cut edges, incorporating newspaper, chocolate and cigarette wrappers, coffee wrappers, maps, tickets, invitations, leaves, seaweed, fabric, postage stamps, scissors and even the paper he used to clean his paint brushes. “It was a sneaky way to get paint into the collage,” says Baum.

Everything he used was scavenged – he was a low-carbon-footprint kind of guy, recycling materials way before there even was a green art movement. In the 1920s there was an explosion of the printed word and an influx of magazines, advertising materials, film and photo mechanical reproduction. “He just hoarded it,” says Baum. “It became the database he drew from.”

In 1937, Schwitters was driven out of Germany by the Nazis and fled to Norway. When the Nazis invaded Norway in the 1940s, Schwitters went to England. Interned, he made sculpture out of his porridge, according to Baum. Eventually he settled in the rural countryside and made hundreds of collages.

The 1920s was the most productive period of his career, when he was part of an international avant-garde group of artists, musicians, designers and architects. He worked in every medium, published four volumes of poetry and prose, founded the magazine Merz, opened a successful advertising business, created theater sets, wrote plays and children’s books, composed librettos and would perform publicly.

He was a ravenous collector of found objects but judicious in his selection of materials. The clippings serve as a snapshot of life in Germany in the late 1910s and 1920s and bear witness to the urban, bureaucratic, media-saturated environment in which he worked, according to exhibition materials.

The Merzbau (Merz Construction) in Hanover was Schwitters’ magnum opus on which he worked for a decade and a half. A massive walk-in sculptural environment in which the artist worked and lived with his family, it was a precursor to installation art and incorporates architecture, assemblage, collage and painting. Sadly, what he considered his life’s achievement was destroyed by Allied bombing in 1943, but happily it has been re-created at the center of PUAM. Visitors can enter it and walk around and imagine what it might have been like in the 1930s.

“It crystallized and exemplified his most important stands of work,” says Baum. Schwitters invited friends to participate in its creation.

While walking through the Merzbau, visitors will hear absurd sounds coursing through the gallery. It is a 1940s recording of Schwitters reciting his Ursonate, a phonetic poem described as “a sonata in primordial sounds.”

“He wanted to devise a way to make sound that was not attached to meaning,” says Baum. “Like the Merzbau, it was worked on for more than a decade and considered one of his life’s achievements.

Listening to the recording, and looking at the photo of an obviously amused Schwitters as he was producing these sounds, a visitor can’t help thinking, the Dadaists had all the fun!