Splendor in the Grass 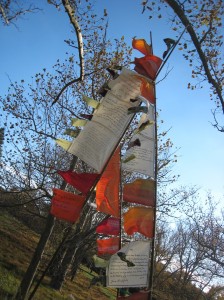 On a late summer day, standing before a wall-sized painting of an orangutan in their color-filled living room, Scott and Hella McVay look out the large glass expanse and lament the state of their garden. It has been a scorching summer, and their travels have kept them from watering. To this eye, we could be gazing at Monet’s Giverny. And just as in the French Impressionist’s gardens, there is a bowed wooden bridge here, this one built by David Robinson of Natural Edge in Trenton.

The house is filled with artwork and sculpture that reflect their interests in travel and world culture, as well as local artists. There is everything from African masks and aboriginal art to work by Princeton painter Tom George and New Jersey ceramic artist Toshiko Takaezu. In fact there are quite a few works by Ms. Takaezu, who gave them as gifts when she visited. In addition to Ms. Takaezu, the couple has counted as friends cosmologist Carl Sagan and PBS producer Bill Moyers. Saxophonist Paul Winter played at their daughter’s wedding.

Ms. McVay, tall and striking with a slight German accent, settles into the couch, and Mr. McVay, sitting opposite her, wraps his leg around the arm of his chair. When he speaks, names and dates, right down to the time of day, roll off his tongue. And whenever he mentions a poet, he will name the year he or she won the Pulitzer or Nobel Prize, and maybe even some titles and a few lines. His is the kind of mind that evolved in a pre-Wikipedia era.

Married for more than half a century, the couple completes each other’s sentences, and it’s often hard to separate one’s quote from the other. Mr. McVay talks about his wife’s natural affinity for animals, and how during a visit to Borneo in the 1980s an orangutan jumped into her arms.

“We are omnivores in terms of life,” he says. “We like art and nature and connecting them.”

The McVays are putting the finishing touches on the Poetry Trail they have planned and funded, through the D&R Greenway, at Greenway Meadows Park in Princeton. It will be unveiled with a large ceremony, including Paul Winter in concert, Oct. 17.

Long-time stewards of the environment, the McVays built their house to be passive solar in 1981. On the site where their previous old stone home burned down, the contemporary house gets most of its heat from a wood-burning stove. A greenhouse serves as a dining area and allows warm sunny air into the rest of the house. And in warm weather, the house benefits from a two-foot overhang blocking the sun as well as overhead fans to draw in the cool air. A quarter century ahead of its time, the house was featured on a 1984 green house tour in Princeton.

A champion of education, conservation and the well being of mammals, among other causes, Mr. McVay was the founding executive director of the Geraldine R. Dodge Foundation and, with Roger Payne, discovered and documented the six-octave song of the Humpback whale.  Since then he has led two expeditions to the Alaskan Arctic to study, record and film the rare Bowhead whale.

Through his work on the language and songs of whales, “We’ve discovered we are not the only ones who are special.”

Ms. McVay, a mathematician, was founding chair of the mathematics department at Stuart Country Day School. A long-time trustee of the D&R Greenway Land Trust, she founded the non-profit Whole Earth Center in Princeton in 1970 and served for many years as its president.

Longtime lovers of poetry (he wrote his senior thesis at Princeton University on the consciousness of George Bernard Shaw, and she has considered mathematics a language of elegance, conciseness and precision), the couple created a poetry initiative in 1986 that led to the biennial Dodge Poetry Festival.

Following in that tradition, the Poetry Trail at Greenway Meadows Park is a meandering path that will feature 48 poems “inspired by Nature and the human voice responding to its splendor and wonder,” according to the sign. It includes the poems of Pulitzer Prize winners, U.S. Poets Laureate, Nobel Laureates, “a few immortals and a comparatively unknown or two. The common thread is the poet’s close read of some aspect of the natural world.”

The trail begins in an allee of 200-year-old sycamore trees and moves up a hill past newly planted American chestnuts. “The poetry was chosen to reflect the beauty, surprise, mystery, seasonality and timelessness in the natural world from which we arose and which provides daily nurture,” says Mr. McVay.

“It celebrates poets in a variety of cultures, languages and time frames,” says Jo-Ann Munoz, D&R Greenway director of communications. “They want it to be a discovery for visitors. You have to walk the trail and experience the poem in the environment where it is set.”

“We (selected) poetry that will speak to everyone, including children,” says Ms. McVay. “The piece of land has been preserved for passive recreation – jogging, walking dogs – and it would be nice for them to stop and contemplate the poems.”

One thing they were not interested in was a Dead Poets Trail. Some of the poets represented here have “crossed the great divide, and some are still vibrantly with us,” says Mr. McVay.

Just as the Dodge Poetry Festival brought many poems out of the classroom and into the popular realm, especially when the Bill Moyers special on the festival was broadcast on PBS, the McVays hope the Poetry Trail will do the same. “If you think you’ve seen poetry everywhere it’s not an accident,” says Mr. McVay. “Take Rumi, a 12th-century scholar, who has been made popular by Coleman Barks’ 16 books of translations. It’s put Rumi on the map and he’s now the fastest selling poet in the U.S. and the most read and well-listened to on radio in Afghanistan.”

Ms. McVay, who is busy creating poem flags – modeled after Tibetan prayer flags but with poems written on Marimekko fabric – was adamant that the signs should not include cutesy pictures to depict the poem’s imagery. “No butterflies, no clouds, no mushrooms or hedgehogs,” she says, choosing instead a strip of color on one side, like the spine of a book, so readers can experience their own imagery. “The conversation goes on in the heart and mind of the viewer as well as the epiphany in writing the poem,” says Ms. McVay.

On the Greenway board for 20 years, Ms. McVay was at the forefront of combining art and nature at the D&R’s Johnson Education Center, and poetry was a natural extension. “The Greenway understands how important the arts are for land preservation and stewardship.”

In addition to the poetry signs, designed by Z Signs of Trenton, there will be benches by Mr. Robinson, who built the bench in the McVays’ yard. Mr. Robinson is well known for his rustic designs in parks and botanical gardens.

“It has been a joy to see it come alive through their eyes,” says Greenway President and CEO Linda Mead. “It represents the right combination of all their interests: world culture, the environment and poetry, and it creates the perfect legacy for Scott and Hella. Their dreams benefit not only the local community, but people will come from all over, and that’s the joy for me in this.”

The McVays have not only given the money to build the Poetry Trail, but a charitable gift annuity that will assure the trail is maintained throughout the years.

“Kindness to our surrounding pays back so much,” says Ms. McVay.

“The Princeton community has nourished us so well in the arts, culture and science and we want to give back,” says Mr. McVay. “We’ve been extremely lucky to have traveled to Nepal, South and Central American, Africa, Russia, the Arctic and Antarctica, but the biggest miracle is in our own backyard: a Great Blue Heron, the resident frogs when I go to get the paper in the morning, pileated woodpeckers who set the drum beat, and the little guys – the pollinators and bats. (Entomologist) E. O. Wilson said there’s more life in a cubic centimeter of Earth than in all of Jupiter.

“If you get involved in any one species,” he continues, “you are concerned with the whole web of life. We need the bees and bats.  Poetry reflects the close observation that allows Frost to write about a speck. It’s similar to what you find in science, the capacity to observe something closely and recognize pattern, to put order to intuition.”